This Christmas is the 200 year anniversary of the Gospel being preached in this land! As we survey the last 200 years there is much that is grievous, especially in regards to relationships between those of European descent and those of Māori descent. There is also great hope and joy if we also take the time to remember the impact of the Gospel on these two peoples. It took some time before the Gospel took real traction among the Māori people but when it did it was transformative. God had already given a partial revelation of Himself to the Māori people and had prepared them to receive a fuller revelation through the preaching of the Gospel. Evidence of this transformation is still clear throughout the Māori culture today. For example Wairua Tapu (Holy Spirit) and Ihu Karaiti (Jesus Christ) are regularly honoured in karakia (prayer) because doing so is a Māori practice even in contexts where white New Zealanders usually no longer honour God.

While God was working among Māori people in the 19th century, He was situating people who feared Him in the Colonial Office in Britain. Because of the fear and love of God, these individuals had revolutionary ideas of indigenous people which included a desire for them to be treated with justice as people created in the image of God. These ideas were instrumental in the unique relationship the Crown initially formed with Māori and ultimately in the signing of the Treaty of Waitangi. Missionaries also had a role in the relationship between Māori and non-Māori, in the Treaty and sometimes in pleading with or challenging settlers who failed to honour the Treaty. Unfortunately the transforming power of the Gospel was often not evident in the actions of European settlers toward Māori.

As Christians today, Māori and Pākehā, we still have a ministry of reconciliation (2 Corinthinas 5). I am so fortunate that I know kaumatua (leaders) who have taken this calling seriously. I am noticing that many churches appear to be stirred to embrace this calling at this time. For myself I have seen my own predominantly white church respond to an invitation by these kaumatua to worship God on their marae. Two hundred of us showed up and the name of God and His Word was honoured throughout the Māori tikanga (appropriate behaviour) and powhiri (process of two groups greeting one another and receiving hospitality) as well as through worship in song. I see a new willingness to show deference to one another by honouring each other’s cultural expression of lifestyle and worship (Romans 12:10, some versions saying, “In honour giving preference to one another” while others state “show respect for one another”. I suspect Paul in mind had those who are different from ourselves when he challenged us to show respect.) I cannot help but consider Psalm 133. How good and pleasant it is when brothers dwell together in unity… there God commands a blessing.

Standing on the edge of this anniversary I am convinced this nation will thrive when touched with God’s blessing. I suggest this subject matter would make the focus of some great lesson plans and New Zealand specific extension to the ACE curriculum with your children.

Resources We recommend using a critical approach while using resources for this task. What this means is being willing to engage with an author or a resource whose beliefs don’t entirely match your own and considering whether there might be some merit in some of what they say, particularly in regards to applying Biblical principles to a modern situation in ways you might not have done before. It might mean reading about God being referred to from a different language or being understood from a worldview different to your own, or it might mean recognising when the history fails to acknowledge the work of missionaries or paints these imperfect human beings in an unjustifiably negative light. You might also wish to read my concluding thoughts regarding engaging with the Māori culture from a Christian perspective.

Aim Here are some suggested aims from which you might want to choose.

Method of teaching Here is a suggestion of how do develop a lesson plan method.

[which] are all in Māori, except the Waikato sheet, which is in English.” If you can’t physically visit then have a look at it online.

Evaluation You might have your own evaluation idea, but here are some from us.

In my own journey of engaging with the Māori culture initially I felt uneasy and suspicious of inadvertently being caught up in spiritual practices or powers that were evil or idolatrous. I believe that is a concern felt by many Christians, probably wisely. In this regard the apostle Paul is possibly a good example of engaging with another culture while maintaining an absolute hold on the Gospel. Jewish believers, who had been suspicious about Peter preaching the God of Abraham, Isaac and Jacob to non-Jews and offered them salvation through Jesus the Messiah, later insisted that non-Jewish converts adhered to all the practices of Jewish people. Paul laid down a bare minimum of requirements for non-Jewish converts (primarily to abstain from sexual immorality and idolatry Acts 15). It would seem that these two issues were critically important if Jewish Christians and Gentile Christians were to be able to worship together thus demonstrating the uniting power of the Gospel. His special revelation for this period of history seemed to be the reliance on Jesus as saviour and not to rely any longer on outward religious practices (Galations 3 is a good place to consider this view as is Romans 2:17-29). I humbly suggest for your consideration that sometimes as Christians our suspicion of other cultures has been more focused on outward practices which God can redeem and use (for example the Māori tikanga of saying a karakia). The evidence of a changed life or a transformed culture can clearly show God’s redemption working within and blessing a culture different from our own (which also has ungodly elements). In this regard it is notable the profound impact of the Gospel on the Māori people and culture in the early days of European settlement. 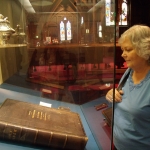 As I have engaged with Māori culture and matured in my faith, I have developed greater confidence in God’s ability to guide me in discernment. Over time exposure to the Māori culture has given me a perspective from which to consider the Pakeha culture in which I have been predominantly immersed and enabled me to see ungodly elements, such as consumerism or cultural arrogance, which need the redemptive touch of God. I praise God that in His wisdom He brought these two people groups together who have different strengths and weaknesses and can balance one another. I know under His guidance, and with our cooperation, He can bring healing to broken places in our relationships.

Thank you also for the many years you have supported and encouraged me throughout my school years. I have enjoyed the A.C.E. programme thoroughly, and I am looking forward to studying next year with the skills and self-discipline I have learned.

We are well pleased with homeschooling this year. The children have made great progress academically and with their character development. It is such a blessing and so right! Thank you for your valuable assistance and advice.

Just a short note to say thank-you very, very much for all you have done for myself and my boys to ensure that our homeschooling experience with A.C.E. was enjoyable, manageable and possible. Thank you for all the support you've given, and advice also." "I must say that we are very thankful to have tapped into this God-inspired educational resource for our children—it is Excellent!